Parent Visit Day Two: In the Mood for Food

After the last time the husband and I went to a dinner concert hosted by Philip Gelb's In the Mood for Food, we knew that we wanted to go to as many of these events as we possibly could. The food and entertainment are both of the highest caliber and they come together to create a rather magical experience. It's certainly not something you can find every day, but it was something we found again last night.

First of all, the musicians on hand, a violinist and an oud player, delighted our ears and hearts with their amazing technique and soulful melodies. They, alone, were worth the price of admission. To be served and astounding 5 course vegan meal on top of that was just sheer delight. Even more exciting was that the menu consisted of Philip's experiments in combining Japanese and Middle-Eastern flavors, an homage to his culinary leanings (Japanese) and the violinist's background. Before we even ate I leared what raw wasabi looks like, and in the second course, I experienced that ingredient in a way I never would have thought of: 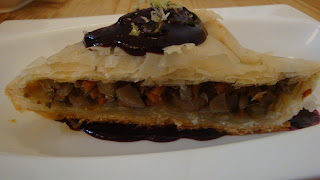 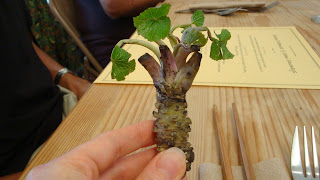 On the left, wasabi in the raw. Who knew it was so pretty? :) On the right, we have carrots, lotus root, and burdock, stir-fried, wrapped in filo and topped with a blueberry wasabi sauce. It was truly a revelation for me. The saltiness of the veggies, the savory pastry, the slightly sweet/slightly tart blueberries and the nose-clearing wasabi all balanced each other perfectly. I haven't had so much fun eating anything in a long time. 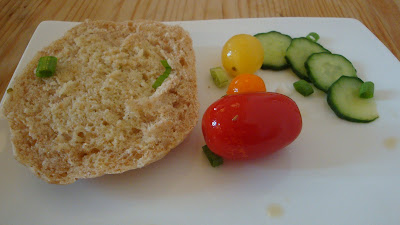 But, I'm getting ahead of myself. First up, there was fattoush (a traditional Arabic bread salad). This one was deconstructed - made from homemade pita and veggies treated with tradtional Japanese flavors, like yuzu juice and toated sesame. To see a plate that seems so obviously Mediterranean and have it taste Japanese was so surprising and unique, and it set the theme for the meal. 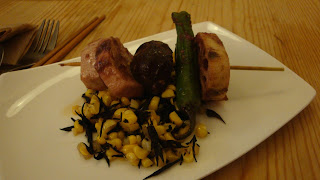 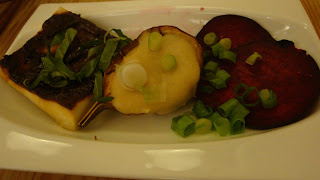 Our third course, on the left, was a Japanese veggie kabob, marinated in middle eastern flavors, and served over a deliciously sweet and salty corn and hijiki salad. So much fun! For our fourth course, on the right, we had homemade tofu and eggplant, each with different miso glazes and served along with beet pickles. The glazes were to-die-for good (I wanted bottles to take home) and this dish left me totally happy. Of course, dessert always makes me happier.... 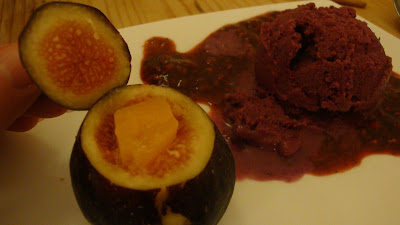 For dessert, the whimsy continued, as we were served a fig stuffed with apricot kanten (jello made from agar agar and not nasty horse hoof gelatin) alongside the most amazing blueberry ice "cream" I ever did have. The night was warm, and this was such a fantastic light ending to an unforgettable meal.

These events Philip puts on are are so much about love to me. Love of music, love of food and cooking, and the love that can be created amongst strangers willing to share those things on a beautiful night in the Bay Area. I can't wait to go back, and recommend you do too.
Posted by Sky at 6:07 PM

Something else you should know about--Brassica Supper Club. Run by a friend of mine who trained at CCA and cooked at Millenium. Fabulous fancy vegan food, served at a house in the Sunset 2 weekends a month, $35 donation per person. Enjoy!

Oh I know all about it - just haven't been able to make it yet. :( I've heard great things and can't wait for the dates to actually match up with my free time! I'll post about it on EWWO of course. :)