The weather has been wonderful here lately, and there is something about sunshine that makes me want Mexican food like nobody's business. So, on Saturday, I sated the craving. Knowing that we were going to have drinks and hear some jazz at Les Joulins later in the evening (highly recommended btw), we decided to search for Mexican food in the vicinity. As it turns out, about two blocks away is the cantina-style restaurant Tropisueno. It's tucked away on an alley between 3rd and 4th streets so I'd never even seen it before, but it's a welcoming and festive space. Having concerns about vegan options just from looking at the menu, I emailed beforehand and had a nice exchange with Erin, who assured me that two of their beans are vegan and that the veggie tacos could easily be made vegan by removing the cheese. (Vegans beware: The vegetarian entree contains cream, and it doesn't mention that on the menu.) So, here's what I had: 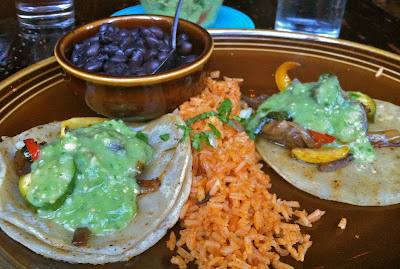 Those are the might tasty veggie tacos with black beans. That green tomatillo salsa was nice and mild but full of flavor and the veggies themselves were cooked beautifully. These were great as is, but when topped off with some of the house-made (and REALLY delicious) guacamole that we ordered, they were perfecto! Also, the chips and salsa that came to the table gratis were fantastic. We will definitely be back next time we're craving some spice. It's the perfect place pre or post shopping, movie, or MoMa excursion, and I'm so glad to have discovered it!

Keep checking in at Vegan Favorites, of course, but stay tuned for some more new-to-me SF eats soon.... :)
Posted by Sky at 1:47 PM No comments: