Last night I enjoyed my last dining out experience in SF for a while, and since it was a gorgeously hot day, I chose the delicious and beautiful sushi creations at Cha-Ya. Not wanting to have any of their very yummy noodle soups on such a warm evening, I was still hungry after a few rolls, and decided to order dessert, something I've never done there before. The ice cream sundae was calling my name, however, and it was on the table in no time flat. 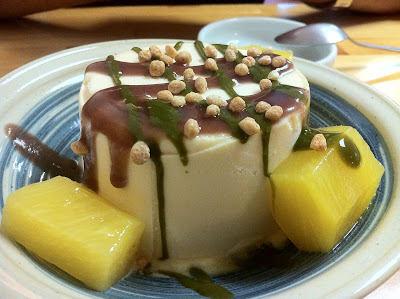 With red bean and green tea syrups, I was sure this was going to be one interesting dessert. Sadly, it tasted like old school chalky Tofutti ice cream and not much else. And those pineapple chunks were straight from the can. Oh well. Next time I know to just eat more sushi. :)

In more exciting news, I leave tomorrow for VidaVeganCon in Portland, OR. I can't wait to mingle with other vegan bloggers, including Shelley of course! And then there's the food. I have to loosen my belt just thinking about it! Right after Portland, I'm off to Austin, TX to celebrate my parents' 40th wedding anniversary.... and eat even more great vegan goodies. All I have to say i stay tuned, people. There's gonna be a lot of eating well to go over when I return!
Posted by Sky at 2:14 PM 2 comments:

Back to Some Old Faves

When my friends are in town, I like to show off the bounty of great vegan-friendly restaurants we have here in the Bay Area, and what better way to do that than by picking two places that also feature our watershed's amazing produce. Back to Gather and The Plant Cafe we went!

At Gather, the vegan charcuterie is a must. This time around it was as stellar as ever, with the bbq "pulled mushroom" slider (second from the left) being my favorite. Smokey bbq and cool coleslaw perfection. 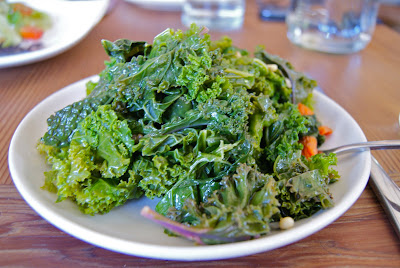 Up next I had the crazy good - and good for you - kale salad. There is always some version of a kale salad on the menu and it is always delicious. This time there were carrots and capers and pine nuts - oh my! 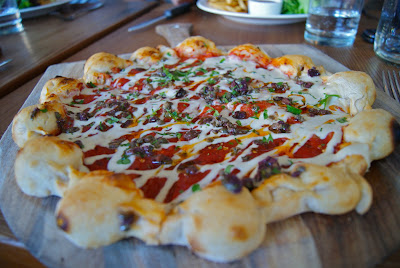 Behold the beauty that is the spicy tomato pizza. Made with cashew puree instead of cheese, it is warming, rich, and wonderful. The crust alone is worth writing home about. I miss it already. 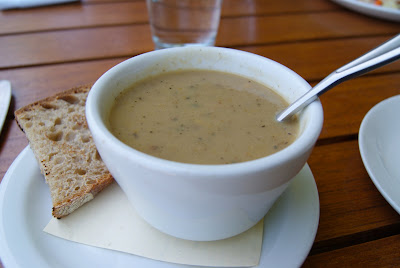 At The Plant, I got my standards. The summer squash soup (above) was peppery and light and just the right thing to take the ever-so-slight chill out of my bones. 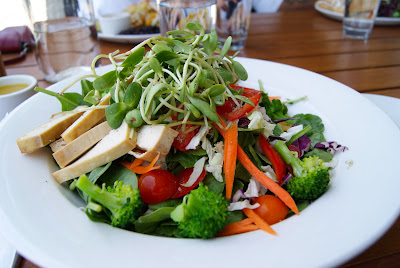 Here you see the MNM salad, my go-to. It was, as usual, full of fresh and crunchy veggies. Like a salad should be.

My stomach is taking a break today after our week of dining out (no I didn't take more pics, sorry), but I'm sure to back out and eating well soon. Enjoy the rest of your weekend everyone!
Posted by Sky at 4:28 PM No comments:

We headed up to Napa this past weekend for some good wine and sunshine. Of course you gotta eat too, and Napa has some of the best food around. As you know, I am a big fan of Ubuntu, but on this trip, we decided to try some new spots. First up was Michael Chiarello's Bottega. I was psyched to dine here, especially as Chef Chiarello won the vegan challenge on Top Chef Masters. Sadly, I wasn't that impressed by their vegan fare. They also seemed totally taken aback by the vegan request, even though I had noted it on the online reservation AND called to make sure we could be accommodated. Sigh. Anyway, here's what we had: 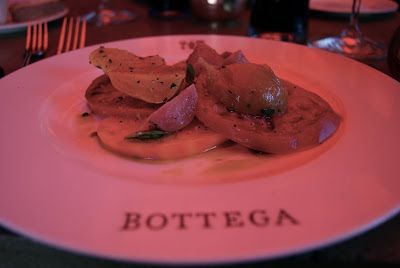 This heirloom tomato and beet salad was actually delicious. Don't let the hue throw you off. We were underneath the orange awning, making all our food appear reddish. In any case, it was tasty, mainly because it's the height of summer and the ingredients are outstanding. 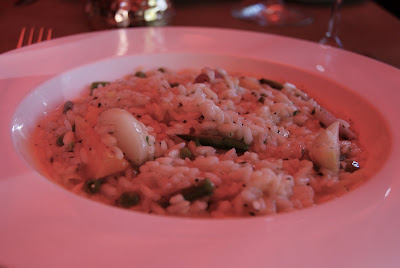 Our main was a risotto. It was good, but nothing to write home about. Maybe I set my expectations too high? Do I have to be Zooey Deschanel for the Chiarello kitchen to step up the vegan goods? 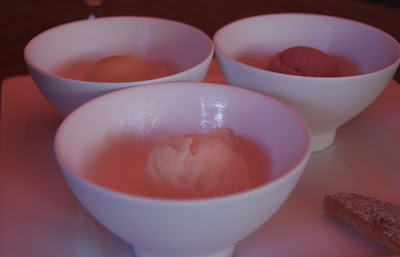 So, of course, there was sorbet for dessert. The cantaloupe was the best. It's cantaloupe season after all. 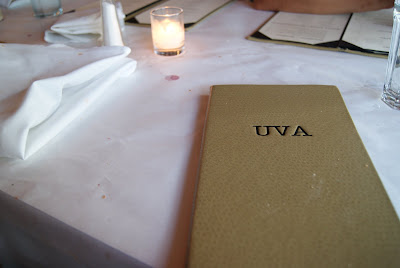 The next night, we decided to try to get some better Italian food in our bellies and crossed our fingers as we entered Uva Trattoria. You know what? It was great! My husband got the big bowl of pasta with veggies he was craving (pays for you to have egg-free dry pasta sometimes, Italian restaurants) and I was delighted as well. 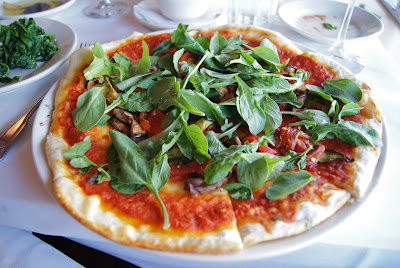 I started with a simple but scrumptious veggie pizza topped with arugula. So satisfying after a day of wine tasting! Crisp crust, perfectly roasted veggies and a slightly sweet sauce made for a great dinner. 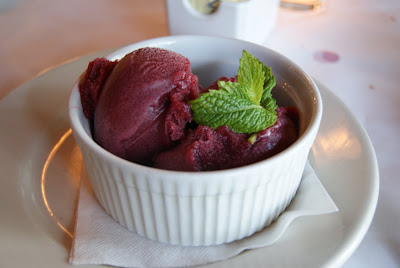 The raspberry zinfandel sorbet didn't disappoint either. It really packed a wollop of flavor and was a beautiful way to end the meal. Thanks Uva!

Next up, more Bay Area dining, as I've got friends in town and we're eating our way around the Bay....
Posted by Sky at 2:17 PM No comments: