On day four, we decided to check out Central Square over in Cambridge. I was familiar with the area from when Shelley used to live over there, and I knew that Harvest Market would be a good place to get some salad bar or pre-made sandwich lunchy stuff. What I did not know is that Clear Conscience Cafe, aka C3, is now attached to Harvest and is serving up super yummy food, lots of it vegan. I still went salad bar, as my need for the greens is high, but my pal got this gorgeous panini: 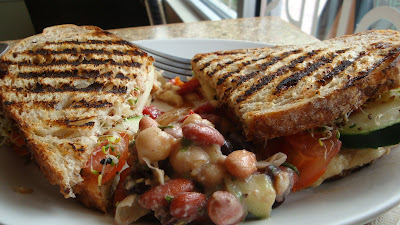 Made with organic greens, hummus, and veggies, and served with a bean salad on the side, it makes for quite a dazzling lunch. C3 is a great little spot for a quick bite or a lingering coffee, not to mention if you sit near the window the people watching is fantastic. Highly recommended. 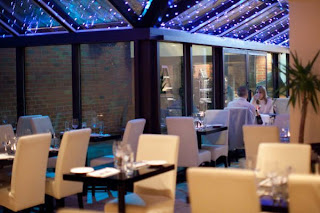 By dinner time, we were back in Boston and looking forward to trying a place I had researched online: Vlora. (I totally stole that pic, left, from their website, but that's exactly where we sat, btw.) Vegans are always pretty safe when it comes to Mediterranean food, and Vlora is no exception. The kitchen here offers up tons of vegan options daily, all of which are marked by two cute little hearts on the menu (one heart denotes vegetarian). That alone made this place all the more endearing, in my opinion. However, cute hearts aside, I don't give me love away without the food actually being good too. In order to know for sure just how seriously Vlora takes its veggies, we ordered everything vegan on the menu. (Ok, we skipped the pickled eggplant but maybe next time). I didn't take pictures of everything, but here are my faves: 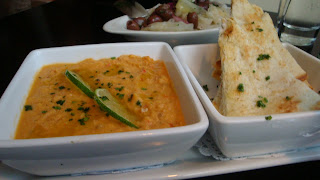 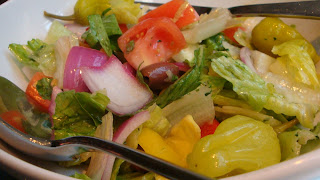 First up is the Greek Salad (sans feta of course). I love pepperoncinis in my Greek, and this one had a plethora, along with olives, tomatoes, red onion, and just enough dressing. Divine. We also got the old staple of pita and hummus. This was a red pepper version, hence the orange hue, and is was scrumptious with the fresh-baked pita. It only gets better though.... 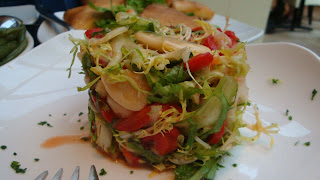 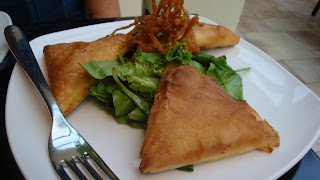 These last two were the real show stoppers. On the left is fasule - a tower of savory gigante beans, crisp frisee, and sweet roasted red peppers all tossed in a garlicy vinaigrette. I can't even tell you how good this was. It made me want to learn Greek and move to Mykonos. And that was before I tried the phyllo pies. Theses babies may not look like much, but inside their flaky phyllo exterior is a mouth-watering tomato and onion mixture that is to die for. If they had given us ten, they all would have been eaten.

Devoured, but not pictured, items include roasted carrots, sauteed string beans, cabbage salad, herbed couscous, sauteed spinach, and bread with lemon olive oil. All were really satisfying, and this meal of epic proportions was actually just what we needed after walking around all day. That's the lovely thing about Mediteranean food - it's filling, but light. In fact, refueled, we even left Vlora and walked around some more!

Next up: My last day in Boston (including that pizza dough I mentioned earlier) and a meal worth returning home for.
Posted by Sky at 3:59 PM