Day seven began with us hopping in the car for a road trip to Santa Cruz. Wildfires, be damned! We were gonna get our grub on come hell or high flames. As we rolled in around lunch time, the town definitely smelled like smoke, but it wasn't unpleasant. It was kind of like being around a campfire 24/7, and it certainly didn't interfere with our hunger. 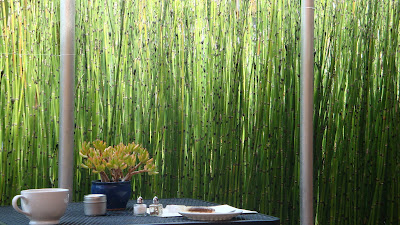 Santa Cruz has some pretty well-known veggie eateries, but perhaps none more so than the Black China Bakery. Their cupcakes and cakes are sold in stores and restaurants throughout the Bay Area, and are super rich, decadent, and HUGE. It was a given that I'd want to go to the source, but when I heard they also ran a cafe serving yummy savory food as well, it was a must for our first stop. Ignoring the smoke, it was a lovely day, so we sat out on the patio surrounded by greenery (above), and got to perusing the menu. 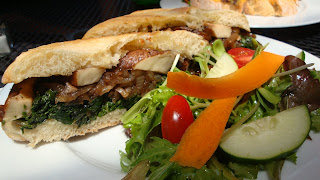 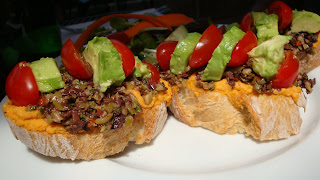 BCBCafe is all vegetarian, but not all vegan. However, there are still plenty of vegan things to taste. On the left is my choice - the portobello mushroom sandwich. The earthy 'shrooms were balanced perfectly by the slightly bitter swiss chard and the super-sweet carmelized onions. Served with a refreshing green salad, it was a delectable way to start my Santa Cruz vacation. My dad also really liked his lunch - the vegan muffaletta. Not your traditional muffaletta by any means, this one is open-faced and topped with red-pepper hummus, olive tapanade, and alternating avocados and cherry tomatoes. Simple and delicious food is what BCBCafe is all about.... 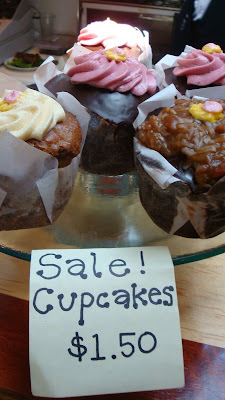 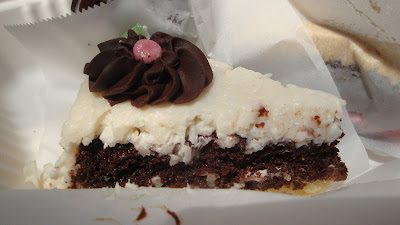 ....well, that, and the desserts of course! Vegan cupcakes were on sale (Oh, happy day), and a slice of chocolate coconut cake for the road was also in order. My father, he of the insatiable sweet tooth, was very, VERY, happy.


After checking into our hotel and wandering the boardwalk for a while, we decided laying out by the pool was a much better way to build up our appetite for dinner. Hard to believe, but in a few hours we were hungry again, so we brushed the ash off our clothes, and headed out to Capitola. Only a couple minutes outside of Santa Cruz, Capitola is home to one of the most infamous veggie restaurants in the country - Dharma's. Even non-veg folks have heard of it, though they may only remember it as McDharma's, its former name. This is the restaurant forced by McDonalds' lawyers to drop the 'Mc' or else. They're still up and running though, and better than ever some say, so I was eager to give the place a try. 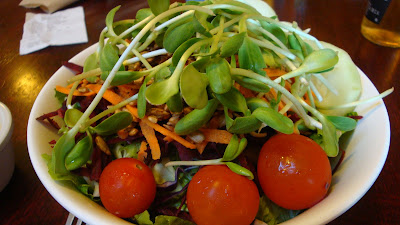 The menu at Dharma's is huge, and you pretty much have to pick a flavor profile (Italian, Mexican, Thai...) and then narrow it down from there. However, I have to say that my salad (above) was the highlight. I had the lemon tahini dressing and it was bright and fresh and paired perfectly with the sunflower seeds and veggies. I should have just ordered another one of those... 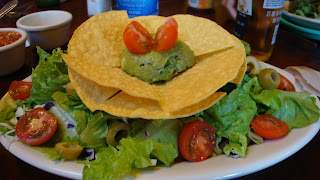 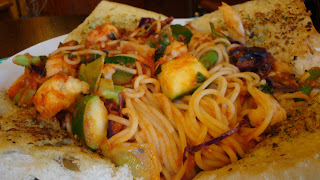 My Tostada was pretty yummy too, though. A soft corn tortilla and a pile of beans lie under that unassuming layer of greens, and the side of salsa and dollop of guacamole brought everything together. Not the best Mexican food I've had, but pretty darn good. Hubby, on the other hand, went Italian and got the Pasta Primavera. Served with all the veggies under the sun and sitting atop 4 huge slices of garlic bread, it's a meal for the seriously hungry.

So, yeah, I'd go back to Dharma's to try something else from the huge menu, but I'm in no real hurry. Good but not great. The next stop on our SC eating adventure, however, provided something I'd only dreamed of up until now.... but that's a whole other story.
Posted by Sky at 3:52 PM