I have wanted to go to Weird Fish for a very long time. It seemed like the perfect restaurant for me and my hubby, the pescetarian. The only animals they serve are fishies, and they have plenty of vegan options for the rest of us. Why it took so long to appear on my radar is beyond me. Maybe because it's not on OpenTable (to which I am a slave)? Maybe because it's at Mission and 18th and I'm normally one block over on Valencia (at either ChaYa, Herbivore, Osha, or Dosa)? No matter the reason, it took me way too long to get there.

In addition to the 6 months or so since I first heard about this kooky place, I then had to add another 5 minutes driving around trying to figure out where it is. I finally guessed correctly that is was the joint with all the folks outside waiting to get in. No, the black facade, lack of sign, and "weird" half horse/half mermaid thingy did not tip me off. :) But, back to the waiting people: WF doesn't take reservations, but they will put your name on the list, take your phone number and call you when the table is ready. We happily obliged and headed one block down to the Beauty Bar for a beer. Well, my companions had beer anyway. I don't do well with alcohol on an empty stomach and I was HUNGRY. However, I happily noted that the BB has Blue Moon Beer on tap. Yum.

When we got called, we sauntered back only to find our table still had people lingering over dessert. I guess they wanted to give us enough time in case we had wandered a bit further. Fair enough. We were seated in about 5 minutes and right away I loved the place. First of all, it's tiny and cute. Second of all, the napkins are bandanas. Thirdly, all the staff seemed pretty happy to be there. And then there's the food. My fish-loving (fish-hating is probably more appropriate since they wanted to kill and eat them) friends had a variety of items from clam chowder to fish and chips and the "Suspicious Fish Dish." The latter is a surprise every day - a full meal of some kind of fish that comes with all the fixin's. It turned out to be tuna that night I believe.... but I digress. Let's get to the good stuff. :) 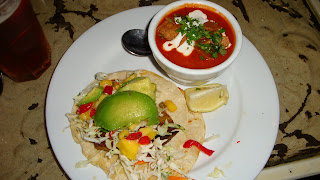 WF does fish tacos, but even better, they have three vegan tacos - a tofu taco, a yam taco, and a seitan taco which they cutely call the "hell taco." A fan of fun language, I ordered the latter, with a side of the vegan tortilla soup, complete with vegan sour cream. They were sadly out of vegan cheese, but these hellish bites were complete heaven without it. Two small corn tortillas arrived on my plate (above) full of bbq'd seitan, avocado, and a mango salsa that was, for lack of a better word, dope. Fresh bright flavors that I could have eaten a lot more of and, since the prices are so great, it wouldn't have been a problem to order more even in these uncertain times. Alas, I decided to save it for next time... and there will definitely be a next time. Since two of my "partners on dine" were out-of-towners, I thought we should finish the evening with a stroll down to San Francisco's own Ritual Roasters. We made it just before they closed, and we all reveled in our delicious decaf Americanos. I eyeballed the selection of vegan yums in the display (right) but was sated and happy, though sad to see my time with my friends come to an end. If anyone else wants to come to town to dine, just let me know. I'm always up for it. We can even go back to Weird Fish, a definite fave for vegans and others alike.
Posted by Sky at 5:18 PM

Sincerely,
Your out of town "others"

Those names work well for you guys actually. :)

I actually like donuts so much more as a vegan than I ever did when I wasn't. I need to make a recipe up for apple cider donuts.

If you make up a recipe for apple cider donuts, I just might get my lazy self in the kitchen to bake 'em!