Adventures of a Domestic Diva

Last night we had some friends over to celebrate their engagement, and I put together quite a feast, if I do say so myself. I'm not sure how it happened, but I seem to be really loving the role of hostess/cook/baker lately, and I'm not bad at it! We've had some great meals at home in recent days, but I'm definitely at my best when cooking for others. Here's how the day went down:

In the morning, I got started by chocolate-coating some marshmallows. I had some Sweet and Sara marshmallows in my fridge from a while ago that I wanted to use, so I thought I'd make good use of the husband's Valentine's Day gift of excessive amounts of chocolate. You see, the heart-shaped box of chocolates he gave me was actually made out of solid chocolate. Yeah. He really loves me. :) Anyhoo, I just chopped up half of it and melted it in a double boiler with a little bit of Earth Balance and hemp milk. Then the marshmallows took a warm delicious bath. Here they are getting ready for their journey to perfection, the chocolate melting (is there anything more beautiful?), and the final product just before they went into the fridge to set up: 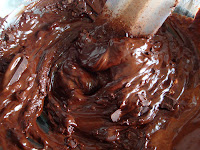 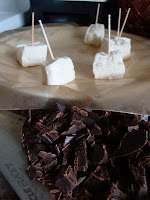 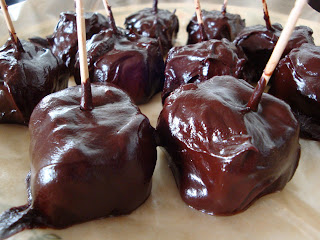 Because one dessert is not enough, and because I had recently purchased some white chocolate chips at Cosmo's Vegan Shoppe, I also made white chocolate and macadamia nut cookies. These were amazing. Let me reiterate: AMAZING. I halved this recipe since it said it would make 40 cookies. I was all set to make 20, but instead decided to just make 9 really big ones, and it was a great decision. They were the perfect dessert size. If you decide to make these yourself, I recommend making them my way, which also includes using roasted/salted macadamia nuts, and then eliminating the salt from the recipe itself. Look at the yummyness: 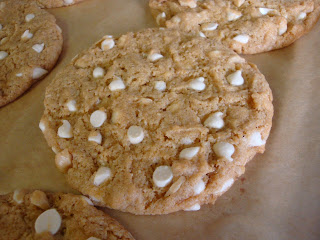 Lest you think we dined on sugar alone, let's talk about the savory stuff. We started with a wine (Sinskey of course) and cheese platter. Included were some crackers, eggplant spread, olives, mixed nuts, and Dr. Cow almond cheese. Because my dining companions aren't seasoned vegans, I also caved and got two varieties of real cheese. Rainbow came in handy here. I pleaded cheese ignorance to the guy behind the counter, and he helped me pick two good cheeses that were organic, reasonably priced, and best of all, vegetarian. Most people think that cheese is veggie, but a lot of it is cultured using an enzyme from the stomach's of newly slaughtered calves. Yeah, gross. Luckily, Rainbow carries plenty that are made using a vegetarian enzyme. In any case, our guests were happy, though my favorite quote of the night was one of them saying, "I'm a nut cheese convert" after trying the Dr. Cow goodness. Success! 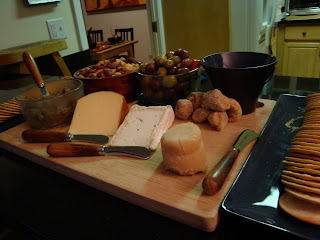 When we finally sat down at the table, my now famous fennel/fig/pistachio salad was served. This combo of my favorite flavors is rounded out by a raspberry vinaigrette and provided a nice sweetness after the cheese, crackers, etc. 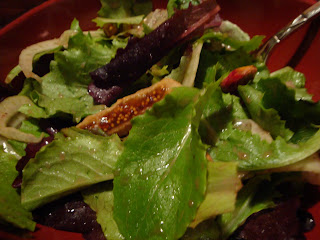 The main event was a pizza with pesto and roasted veggies. I coated some portabellos, peppers, zuchinni, and onions with olive oil, salt, and pepper, and roasted them for 30 minutes at 400 degrees, or until they were just about done. Then I spread the vegan pesto around the pizza dough, threw the veggies on, and let them finish roasting as the dough cooked. Speaking of the dough, I totally used a shortcut here and got some help from the Pillsbury Dough Boy. I learned it was vegan using this great list. It's not exactly healthy, but with so much other cooking, it was nice to not have to think about making a dough too. Here's a close up of the finished product, which was devoured in a matter of minutes. What can I say? The people loved it: 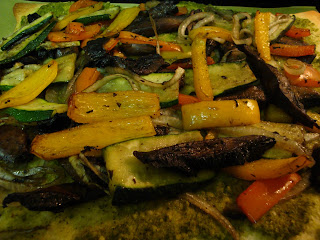 I suppose I should say that my day actually started at the gym. I work hard so I can eat like this, people! I suggest you do the same. Work hard, play hard, right? Speaking of which, now it's time to enjoy a lazy day watching the rain fall. Ahh....
Posted by Sky at 11:49 AM

Yum! Too bad we don't live closer together, sounds like you had fun!

If you lived nearby I'd have you over for dinner all the time... especially since you're eating for two! :)

Wow, everything looks amazing! You did a great job. I really want to try Dr. Cow cheese.

If you ever want to make pizza dough from scratch, I recommend the recipe from You Won't Believe It's Vegan. Holy hell. So delicious. Of course, it's hard for dough to taste bad when there's a ton of olive oil and herbs in it. But still.

Hi Sky, it's Tenneh. I recently started reading your blog and have been catching up on older posts during down time at work. I was very surprised to learn that the enzymes used to make cheese come from calves. I'm not a vegetarian, but I don't eat veal, so this was very shocking to learn. Thanks for keeping me informed.

Hi Tenneh! Glad you're liking the blog. If you ever have any questions, feel free to ask away. Meanwhile, cheese is still not vegetarian. Sad face....