After a tooth whitening experience at Brite Smile the other day (I know, I know, but I've always wanted to try it and then Groupon had an amazing deal, so shut it) I had to eat nothing but white food for a day and a half. I thought this would be easy and stocked up on parsnips, cauliflower, potato soup, fennel, bananas, and hummus. Yummy stuff, for sure, but man was I craving some COLOR when everything was said and done. As I write this, I just had a big salad and some kombucha for lunch and am feeling much more human. Eat the rainbow, my friends. (And that is more than just a plug for Skittles, which happen to be vegan btw.) 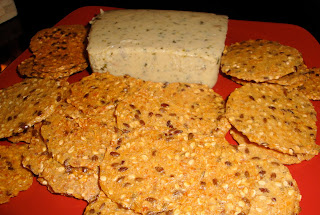 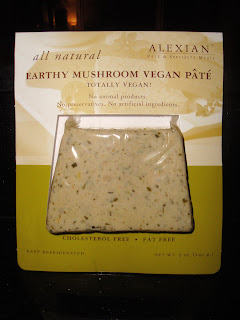 Before the whole white food extravaganza, I tried a new-to-me vegan product, the mushroom and tofu pate pictured here. Made by Alexian, I got it at Rainbow after spotting it in the cooler by the hummus. I was psyched because it looked yummy and the whole block only had like 75 calories. I should have known from that number alone (I mean, is anything low calorie ever super yummy?), but it was pretty bland. I ate it with some Mary's Gone Crackers (a fave) and honestly I only tasted the crackers. Blandness aside, I think I will try the tomato basil flavor that Rainbow also carries. I'm just a sucker for things you can eat on crackers or with a toothpick. Verdict in the future.

Meanwhile, I'll be leaving for NJ and NYC at the end of the week and all sorts of good eating will be happening. I'll be heading back to some old faves and trying out some new places as well, so stay tuned. Here's wishing you all Happy Holidays, and good eats for you... and all your others.
Posted by Sky at 1:54 PM