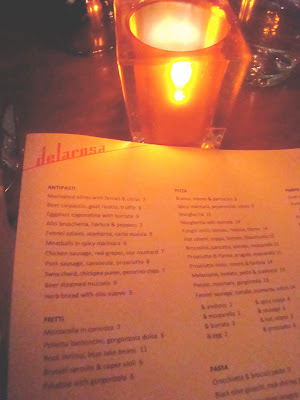 Last night I had the pleasure of joining a big group of friends for some tasty bites and drinks at the brandy new Delarosa in the Marina. It was packed (of course) but the service was decent and the food was, well, kind of like de ja vu. I don't speak Italian, but I'm pretty sure delarosa translates to "grey and orange Beretta."


Don't get me wrong. Beretta, Delarosa's sister restaurant, is one of my favorite places to eat in all of San Francisco. I just didn't expect their menus to be so dang similar. I was thrilled to find some familiar treats to ingest, but I guess I was just hoping for some new things as well. Luckily, the food is amazing so who cares. There are lots of vegan-friendly options, including the inherently vegan spicy marinara pizza, and a slew of items that just need cheese removed. Here's what I had: 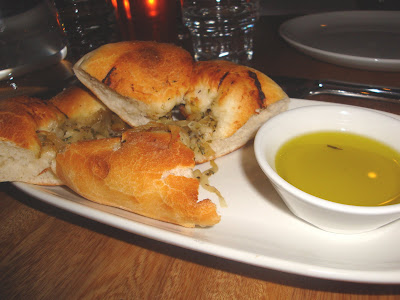 One of my favorite things available on both menus is the herbed onion bread. It is soft, fluffy, and has just the right amount of onion to match well with its fruit olive oil companion. Bread perfection... and I take bread seriously. 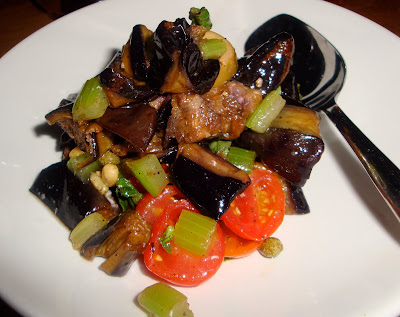 Another dish you might remember from Beretta is the eggplant caponatina. I get mine sans burrata, obviously, and it is downright delicious. Perfectly charred eggplant with roasted tomoatoes, olives, pinenuts, celery and capers is served room temp and practically dancing on the plate it's got so much flavor. I could eat bowfulls. 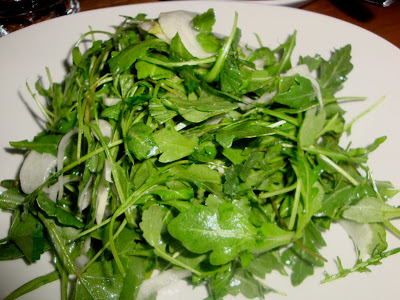 Overall, I just felt like something was missing at Delarosa, and I don't just mean the vegan cheese and sausage items. (Honestly though, what gives? Vegans live North of Market too, ya know.) Yes, they just opened and yes, we were a huge party, but the food just wasn't quite there. Hopefully as they get more in the swing of things, it'll all come together because I know I'll be back. Especially if those rumors of the vegan cheese arriving shortly are true.... You know I'll keep you posted.

Also, for those of you wondering about our Sunday dinner at Roti, I decided not to post about it because I stupidly forgot my camera. Just for the record though, that place is still my fave for North Indian food in SF. Hands down. Go. Try. Eat well.
Posted by Sky at 11:30 AM