There's been a lot of talk about hope lately, and yet I've been feeling more hopeless than ever. This week was particularly hard on my spirits as I watched people handing out eco-friendly light bulbs and biking instead of driving and planting trees and doing all the things we're supposed to do on Earth Day. All of these things felt like a show - a parade of deluded people who think changing a light bulb is going to do a damn thing, while not a single person was talking about the one thing that would really help. Consume less meat. I was especially devastated as I began looking up facts to share with my co-workers. It would appear that when the majority of the population dies from meat-related diseases, they will have left us healthy people with a planet that can no longer sustain life.

So, where is the hope?

Well, I'm hopeful that I'll be able to participate more actively in the animal rights movement as my schedule eases up soon. I'm hopeful that I can help get the message out because I really feel like once people have the facts, they'll at least think about what the hell they're doing. I was hopeful last night when Bill Maher (LOVE him), on his Real Time show, called the link between meat and climate change "the most under-reported news story ever." It was heartening that someone with such a large audience was trying to get the point across. And, lastly, I was hopeful while giving my 3rd graders a talk this week about vegetarianism and how it can help our planet. It made me hopeful that I was even offered the opportunity to do so by my colleague, and that I work in a place where it would be an okay thing to do so.

I mean, why should telling kids the facts - the TRUTH - be so damn controversial? Why, when we are told all the time to eat our fruits and veggies, do people freak out when we say to eat ONLY fruits and veggies? But here I start getting into health issues, and for this particular talk I wanted to focus strictly on the planet. (For more on the health benefits of veganism, please visit Dr. John McDougall's website.)

Here's the poster I used to help make my point. Yes, I am artistically disabled, and of course I passed out vegan cookies at the end to help make the point. :) 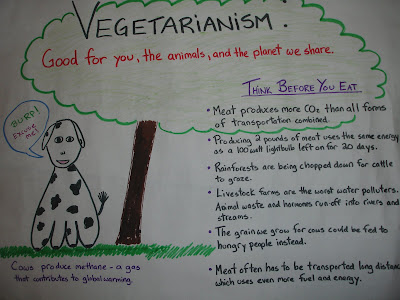 So, while things are still pretty dire, I'm making peace with what I can do to help, and I'm starting to do it. I hope you all do the same, no matter the cause. This concludes my rant for now. Look out for more dining soon.
Posted by Sky at 1:26 PM

This lovely writing and the accompanying poster (love it!)offer abundant proof that there is indeed HOPE! What a lucky bunch of kids :-)

Well, now your path is clear. You need to write a children's book on vegetarianism and animal rights. That poster is too cute, very informative, and yes, expertly illustrated.

A children's book is something I've thought about actually (though I think I would let someone else illustrate!). Can't think of anything but finishing the school year right now, but when it's over, the possibilities are endless! Thanks, Joselle.