I go to Vegas a few times a year, and it's always a good time. Mostly because my friends rock and, as always, the people make the party. I was even more excited than usual for this trip, however, because Steve Wynn has gone vegan and this means that ALL the restaurants in his hotel/casino now have separate veggie menus. Hooray for positive change in Vegas! Sadly, I was only able to eat at one of his places, but I was happy to find some other great vegan eats as well. Here's the rundown.

We stayed at The Palazzo and were starving as soon as we arrived. Best place for a vegan dinner in the hotel? Hands down, Grand Lux. Its huge menu has a few vegan options, like the tofu and veggie stirfry, cheeseless pizzas, and tons of salads and sides. For me, the Manhattan Salad was the winner. 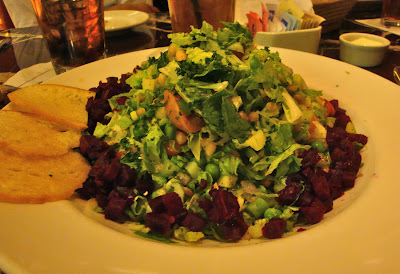 This huge pile of greens, herbs, veggies, and beans is hearty and delicious, though I recommend getting the dressing on the side. The balsamic vinaigrette is vegan and tasty, but you really don't need all that it comes with.

That salad kept me full through a night of gambling, but I woke up starving and headed immediately to the Canyon Ranch Grill, also in the hotel. As someone who knows a little about Canyon Ranch, I knew I would be getting 'spa cuisine' which I assumed would include some vegan options. Right I was! 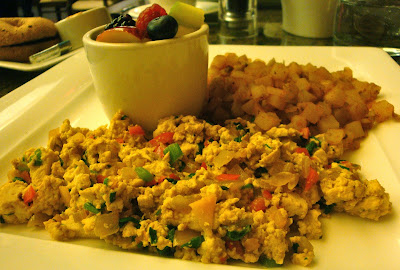 Here is the vegan tofu scramble and potatoes I had for breakfast. To be honest, I also had a sprouted grain bagel with peanut butter too because I was just that hungry (and because 'spa' cuisine also means stupidly small portions). Plus, bagels with peanut butter rule. The scramble, however, was just alright. Not the best I ever had... but for Vegas? Amazing.

That night we finally headed over to Stratta at Wynn for dinner. As promised, the vegans among us were presented with vegan menus. Hooray! Sadly, the options were pretty much what you'd expect from any Italian place: Pizza without cheese, pasta, salads, etc. But still, our own menus! It's the little things that make me happy. Also making me happy? The mushroom puree and truffle oil pizza. 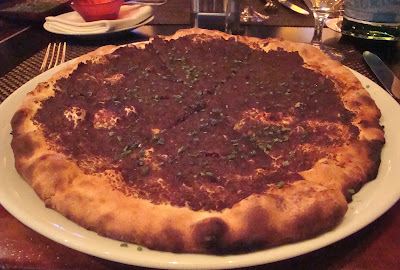 It may not look like much, but it was quite good. Could have used more truffle oil... or even some olive oil (was a bit dry) but I also got a side of sauteed spinach and just put it on top. Viola! Pizza perfection.

All in all, this was one of the most delectable trips to Vegas I've ever had. I REALLY want to go back and try more of the fine dining spots at Wynn because I've heard the fancy pants places have way more creative vegan options. One day....

Nice photos!! Never been to LV, but I've been hearing there's more and more vegan fare available there.

Yes, things are slowly but surely changing in Vegas as the demand increases. I mean, vegans can lose money just as well as omnivores!