Vegan-friendly restaurants are popping up all over the darn place these days, so it should come as no surprise that my home state of NJ now boasts some seriously good eats. I had the pleasure of dining at a few great establishments on my recent trip, and I'm happy to report they were all chock full of patrons happily eating their veggies. 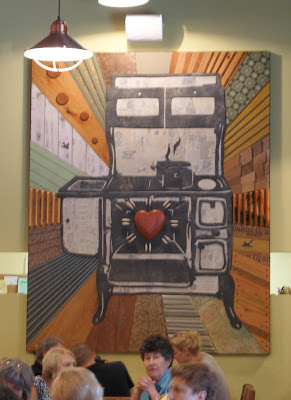 First up? Frenchtown, NJ's Lovin' Oven. It's not all veg by any means, but they are very vegan-friendly (they even serve vegan baked goods!). Plus, I love the name, and I love that they have a huge painting of an oven full-o-love on the wall (above). Of course, all of that would mean nothing if the food sucked. Well it doesn't. 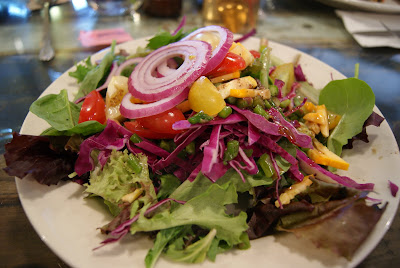 I certainly felt the love in this salad: Fresh-from-the-garden veggies with a perfect mustard vinaigrette. What more can you ask for from a side salad? And then there was the sandwich: 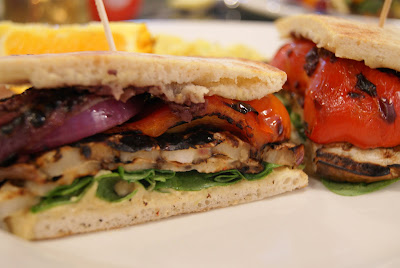 This grilled veggie is served on toasted pita and filled with charred veggies, olive tapenade, and hummus. It may not sound like much, but a grilled veggie sandwich done right can be heavenly, and this one is. Love accomplished.

Next up I hit an old fave in a new spot. The all-vegan Kaya's Kitchen may have moved to a much larger and spiffier location since my last visit, but the food remains superb (with one exception - we'll get to that later). Let's look at some starters, shall we? 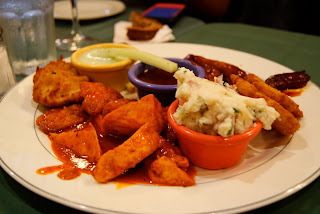 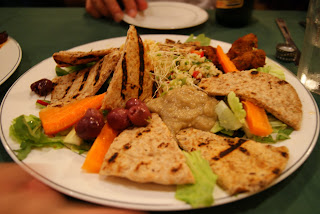 On the left, we have Kaya's platter with wings, ribs, nuggets, potato salad and 2 dipping sauces. The bbq sauce on the ribs alone is enough to warrant ordering this plate of faux meat delights. All of it is savory, lip-smacking goodness. If you go, get it! We also tried the mezes platter, which you see on the right. This delicious assortment of grilled pita, falafel, tabouleh, and baba ganoush is a beautiful thing that got devoured by our large group in no time. We were off to a great start. 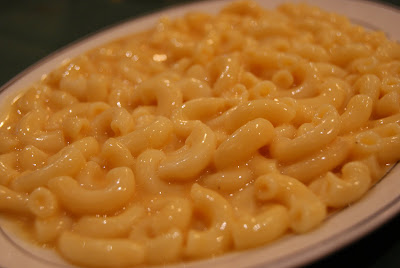 Then I got my mac-n-cheese. Terrible. Worst ever. Runny, tasteless garbage. I mean, do you ever hear of me not finishing anything? No, because I am a glutton to the Nth degree even if the food is mediocre. This, however, was inedible. My mom claims that she'd had it before at Kaya's and it was good, but that my order looked completely different than was she got, so maybe they reformulated? I dunno, but it was nasty. Moving on.... 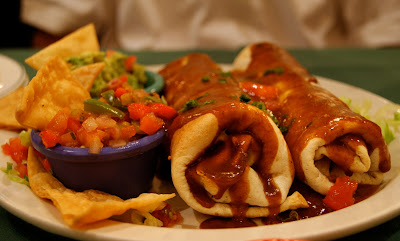 My uncle's enchiladas were the bomb! Spicy and oozing with goodness, I was glad he asked me to help him finish. I wish I could eat them right now. So so tasty. Next time I'm there I already know what I'm ordering. As for the rest of us, everyone else was happy with their orders which ranged from perogies to burgers to lentil loaf and mashed potatoes. The mac-n-cheese was the anomaly of the evening for sure.

Back in omnivore land, I took a trip to Triumph Brewery in Princeton for a big friends and family meal. Theirs is a beer-focused menu, and heavy on the meat and cheese. However, they are surprisingly vegan-friendly. I don't know too many breweries who have a tasty red pepper hummus appetizer plate (eaten before photographed) or entrees that look like this: 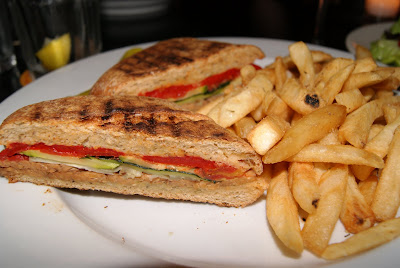 It's a tempeh and grilled veggie panini at a brewery! Gotta love that, but what you really gotta love is the hearty wheat bread, smoky tempeh, and charred red bell peppers. It's a really spot-on sandwich. Vegans can triumph at Triumph!

The rest of my NJ meals were had at home, but there is a new restaurant with spectacular food not far from the state line. That, my friends, deserves a blog post of it's own, so stay tuned!
Posted by Sky at 5:24 PM