Last night my husband and I celebrated our 2nd wedding anniversary, 9 years of being a couple, and 15 years of friendship. It hardly feels that long, but such is life I suppose. Last year, we celebrated our big day with an elaborate Bodega Bay and wine tasting trip. This year we decided to keep it simple and just go out for a nice meal. This was due in part to the fact that it was a Tuesday night, but also because my parents - fun-loving vegans that they are - are coming into town on Saturday and we're in for a week or good eats, Napa trips, and other surprises. So, in keeping with the mellow theme, we wanted to go somewhere in the neighborhood and decided to finally try out Cafe KATi.

First of all, let me assure you that is no error in capitalization; that is actually how they write it. As for pronunciation, I have no idea. I meant to ask while we were there, but I forgot. Oh well...

Anyway, I found the restaurant online first, during one of my OpenTable searches, and I remembered it because it's Asian-fusion-heavy-on-the-seafood menu seemed right up my husband's alley. I emailed them about the veg options on the menu and received a quick response that they could happily veganize them for me. Score one for KATi. I must admit I was still a bit skeptical because some of the reviews on yelp are downright odd. Some recount wonderful evenings while others tell tales of drunken chefs and horrendous service. Still, it was in walking distance, had a decent menu, and was something new, so off we went.

Right off the bat I was a little worried since the small dining room had a large party in it and there was only one waitress. When almost 20 minutes went by without anyone helping us, the bus boy finally took our order, telling us that his boss had to go to the store. Huh? While my husband tried to figure out what they possibly could have ran out of, I was just a tad worried that the broken English of our bus boy was not enough to translate "vegan" to the chef. 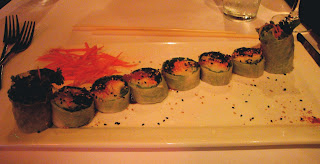 However, as soon as the waitress did return she assured me that she checked the ticket and all was well. Soon thereafter our appetizers arrived. I had the delicious Vietnamese spring roll - rice paper around mango and rice noodles and bursting with mint and cilantro. My only gripe was that there could have been more of the accompanying sauce. It was so yummy, and my rolls were a bit dry. No worries though. My gnawing hunger was abated, and we sat back to enjoy our wine while we waiting for our entrees.

And, well, you get the idea. It took a while. About half way through the wait, the waitress alerted me that the chef had put butter in the cous-cous and asked if I would like jasmine rice instead. Um, yes, yes I would. I'm pretty sure at this point they had to start cooking some rice. 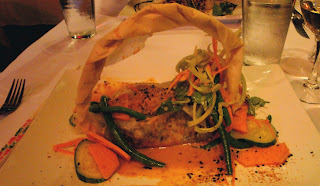 Luckily, we were in anniversary bliss and our mood could not be dampened. Our waitress was extremely nice which made up for the kitchen's slowness, the dim lighting was lovely, and it was a beautiful night. To top it off, when our meals finally arrived, they were awesome. I mean really freakin' good. I had Malaysian red curried veggies and rice en papillote (cooked in parchment paper) and the flavors were spot on - vibrant, savory, and rich. It reminded me of some of the best food we ate in Thailand. Well worth the wait.

So, will we go back? I doubt it. I mean, they only have the two menu items for vegans, one of which has to be altered, and while the husband loved his meal, he is pretty easy to please. I will say that we lucked out in that Tuesday is free corkage night, so perhaps if we've got a bottle of wine that goes well with curry on some Tuesday in the future, you could find us there. But otherwise, there are so many more places to eat in this town, and I plan on trying as many as possible!
Posted by Sky at 8:55 PM

the rolls sound and look YUMMERS! Anything with mango rules!