Back to Lettus, Ubuntu, and Cha-Ya

With my parents in town, the eat-fest is officially on. Being vegan and food-lovers, not unlike yours truly, they are happy to be dragged around to every vegan eatery in town, much to my delight. So far, we've had a blast and have had three meals of note. I've been to all three restaurants before, but have only actually blogged about one. In any event, here's the run-down:

After picking them up from the airport, we head directly to Lettus for brunch. Hunger and excitement precluded me from taking any pictures, but I have to say that this is the best place for vegans and others to get brunch together. The vegan blueberry pancakes are amazing, and always served with whatever fruit is fresh and seasonal. My dad had the tofu scramble which he claims was awesome, and the hubby got his share of dairy and eggs in some french toast. (Note to self: Bring friends to brunch here more often.)

The next day was spent entirely in wine country, and we had a blast. Certainly a highlight of our trip was an amazing lunch at Ubuntu. I'm not sure how I feel about them switching to an all small plate menu, but it did allow me to sample a bunch of different things. I took pictures of almost all the dishes so here you go:

Not a single thing was less than stellar, but my faves were the yellow-bean soup and the grape sorbet. The former was so savory and comforting and those croutons were doused with some super fantastic olive oil and salt. The latter was refreshing, cool, and deeply flavored. Like the grape candy of my childhood without tasting even slightly artificial. Ubuntu serves up some of the yummiest veg food in the Bay Area. Go there if you haven't already.

Finally (for now anyway), we hit up Cha-Ya yesterday. My dad loves vegan sushi, but is always stuck with the pre-made stuff at Whole Foods; not bad, but no Cha-Ya. The pictures I took are of my two most favorite things there: The Seaweed salad with miso-tahini dressing, and the Cha-Ya roll. Normally I don't like seaweed salad because normally it comes with a vinaigrette of

some kind. But, with the miso-tahini, it becomes salty and savory and divine. One of my favorite things to eat in the whole city. Simple and light. On the other hand, the Cha-Ya roll is as decadent as vegan sushi gets. It's a regular roll stuffed with veggies and then tempura-battered and deep-fried. The sauce it is served with is more sweet than savory, making this roll almost like dessert. Of course, if you're anything like us, you'll still be up for a quick jaunt to Maggie Mudd for mini-waffle sundaes: 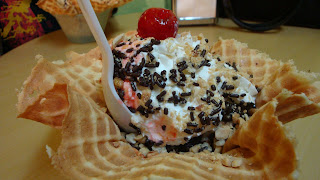 My parents are in town until Saturday and we have plans that include vegan eateries Herbivore, and Millennium as well as some places that are "other-friendly" as well. Stay tuned to find out if my stomach can handle it all!
Posted by Sky at 12:17 PM

On Saturday (really my one day in town) we ate at both Herbivore and Millennium. Seriously, Millennium might be my favorite restaurant ever. I don't know if you know this, but I really don't like food. Weird. But I LOVE Millennium. It makes me happy, and understand how people enjoy food. If I could only figure out how to get one in LA...

Wow, Jess. While I can't even conceive of a person not liking food, I can totally understand how Millennium could cure anyone of that affliction. :) Even though it was one of the first vegan restaurants, it still sets the standard. Glad you enjoyed!

I really love reading your blog, Sky. You're such a fabulous writer and a great photographer. I almost feel like I'm eating right along with you. Keep up the good work!

Aw, thanks Anne-Michelle. I really just do it for the love of vegan food, but it's nice to know someone is out there enjoying it!