It's a funny name for a restaurant, but Tuba (in Turkish, a tree in paradise) is serving up some delectable Turkish bites, many of which are vegan. Be warned: The servers have thick accents and weren't sure about the whole vegan thing, but they were friendly and willing to check with the chef on everything. Here's what we had: 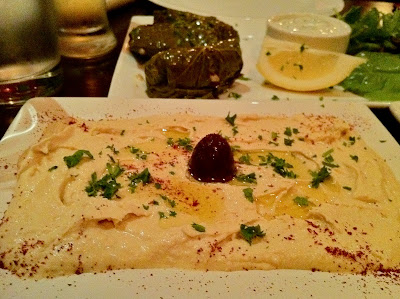 Hummus and Dolmas to start. Both were fairly typical versions of both, only with the addition of sumac. I LOVE sumac, so I was happy. The pita (not pictured) had black sesame seeds on it, which I also love. Not a bad start. 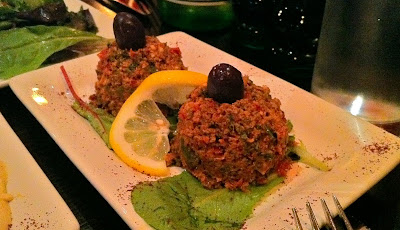 We also ordered some ezme, a ground walnut and red pepper dish. Ezme I've had before has been very smooth, not unlike hummus, but this was a bit on the chunkier side, and also way more flavorful than those in my previous encounters. Nice warm spices really brought the walnuts and and red pepper together in harmony and, after getting past the boob-like
appearance (I mean c'mon, chef, really?) we gobbled it up. 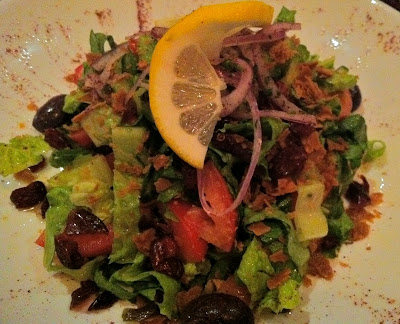 I had this delicious "Ttuba" salad for my entree, and it was really tasty. Kind of like a Greek salad but with no cheese, and with the addition of pita chips and dried cranberries. The sweetness of those craisins was an unexpectedly nice touch. We also got a side of falafel that was nice and crispy on the outside and fluffy inside. I crumbled it into my salad and was quite happy.
All in all, I'd go back to Tuba in a heartbeat. The prices are great, the atmosphere welcoming, and the food ain't bad to boot!
Off to Mexico on Thursday (where I hope to eat VERY well) but I may get in one more SF post before leaving, so stay tuned.
Posted by Sky at 11:49 AM

Think of them as muppet googly-eyes. There. Much better.

As much as I already regret what I'm about to say, I think I'd rather eat boobs. :)

Well, nobody ever accused you of being appropriate, Drew.