Yay! There is finally a North Indian restaurant in walking distance of my house that doesn't suck. Welcome to the neighborhood, Mehfil! 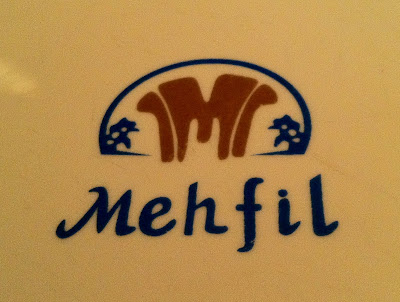 In case you forget where you're eating, the name is on the plates. :)

Since we were a larger group, I made a reservation a few days ago. While I was at it, I told the nice man on the phone the 3 of us were vegan. He told me to ask for him when we got there
and he'd go over the vegan options with me. Well, I did just that, and Ravi kindly pointed out
the numerous choices. 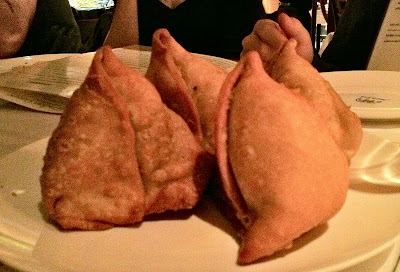 First up we had these fluffy and spicy samosas. I've eaten tons of samosas in my day, and these certainly ranked with the best. Crispy dough, pillowy potatoes and peas, and just enough spice to leave your mouth aglow, and ready for the entree. 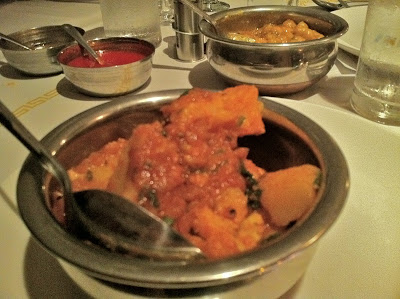 In the foreground is my Aloo Gobhi: Potatoes and cauliflower in a spicy curry. My only complaint would be that I prefer a much higher cauliflower to potato ratio, but that is the s
ame wherever I order this dish. Overall quite tasty. Still, I think I preferred my husband's Paneer Chana Masala (minus the paneer (cheese) of course), which is the dish in the background. It was more mild and savory and had nicely balanced flavors. Plus the chickpeas were cooked perfectly - not mushy at all. I didn't get to try the Mixed Vegetables, which was the entree of choice for the other vegan in our group, but she said it was quite good. Hooray! 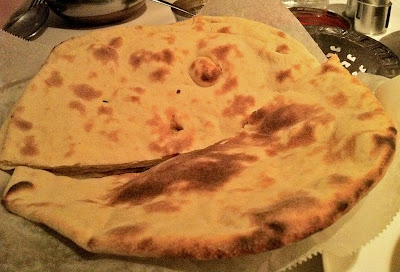 Sadly, none of the rice at Mehfil is vegan because they add cream to it (what???) but they do offer a vegan roti, above. This whole wheat bread was perfect for sopping up sauces, and quite tasty in its own right.

Mehfil is also a winner because it carries a variety of Sula wines, the Chenin Blanc being one of my favorite beverages to pair with Indian food. Verdict: Anytime I'm craving North Indian food, it's off to Mehfil I'll go. Hopefully they do well in their new, and very large, space. Fingers crossed.... 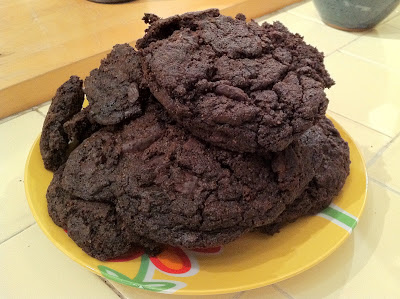 After dinner we went back to a friend's house in the 'hood and had dessert. The vegan mint chocolate cookies from Arizmendi Bakery (above) were amazingly moist and decadent and went perfectly with a few scoops of Alkemie's vanilla bean ice cream, which is cashew and coconut based and very delicious. A lovely sweet ending.

This weekend will be getting its own sweet ending this evening, as I'm attending the launch party for Colleen Patrick-Goudreau's new cookbook, Color Me Vegan. Stay tuned for the full report in the next few days. Meanwhile, eat well and enjoy the rest of the weekend!