My travels are not quite over, but I do have a minute to pop in and give some updates. Of course, it's been so long now that I'm not even sure where to start. I was up and down the east coast of this fine country for almost a month, and did some awesome eating if I do say so myself. I guess I'll just start with some simple recommendations.

Last time I was in NYC I got really sick so my family and husband went out to dinner without me, only to come back and rave about it and make me feel even worse that I missed it. The restaurant in question was Candle 79 and I finally got to go this time around. I was starving when I got there, and then had to wait an hour while my parents were stuck in traffic coming to meet me. The smells and sights of the other diners' food was almost too much to handle, so when they finally arrived, we dug right in. No pics, sorry. I was not level-headed enough to remember. The food was fantastic though. I, of course, had to order the picatta simply to compare with Sublime's. Sublime wins hands down, but 79's was still yummy and all the appetizers, salads, and desserts we had get high marks for flavor, creativity, and presentation. I highly recommend it, and even though my folks are vegan, I think others would love it too.

The night before that meal, my friend and I had dinner at Blossom, also in NYC. The food here was just alright, but if you ever are in the neighborhood, you MUST go in and have the chocolate ganache cake with peanut butter ice cream. It was the greatest vegan dessert I've ever had. Hands down. Rich and moist and balanced well between chocolate and peanut flavors. Even my omnivorous friend was closing her eyes and moaning. In fact, I think her exact words were "Oh my god, what is happening in my mouth?" :)

Those are both pretty high-end places, and sometimes, like when you've spent the day at the beach, you just want to kick back with a burger and fries... or some ribs.... or chicken nuggets (all vegan of couse). If that's the case, head to Kaya's Kitchen. They make vegan comfort food like nobody's business. And, if you're like my cousin who just can't handle the thought of eggplant parm without the real cheese, they've got you covered. With two vegans and two omnivores going into this meal, I was afraid my side of the table would have to be convincing the other side to try things, but they dug right in and were just as blown away by the food as we were. The "ribs" were especially awesome, but the vegan burger I had was a damn close second. Definitely hit the spot. Here is the appetizer medley (ribs in the foreground), my vegan burger, and my cousin Allison and friend Jake proving that Kaya's is so good even omnivores will love it: 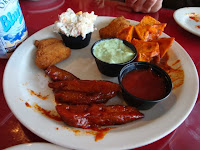 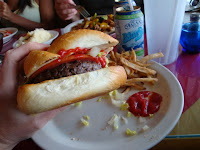 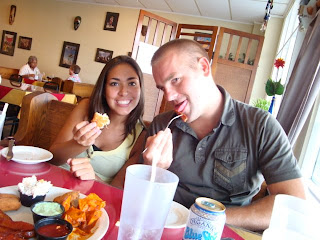 That about covers it for now. I'll save my amazing Boston eats for another day. I promise to be posting more frequently now that travel is winding down, so do stay tuned!
Posted by Sky at 1:29 PM

I'm glad I look like a jackass in the picture.

Brian and I tried to get to Kaya's but there was a thunderstorm. Hopefully we'll get there next weekend. All of the food looks so comforting and delicious!

I love that pic, Jake. I think you look devilish and very unlike a jackass. :)

Kaya's was awesome, Joselle. Order the ribs when you go. Next time I'm home you and I have to hit up Horizons!

Yes, Kaya's is awesome. We've been there before, just not this year. I'm glad your experience this time around was better. You said the buffet was not so great last year, right?

Buffet at Kaya's is not even close to their regular menu. I should have mentioned that. Go anytime but Sunday afternoon.